New for 2017, Chevrolet Silverado HD trucks feature a patented air intake system that drives cool, dry air into the engine for sustained performance and cooler engine temperatures during difficult driving conditions. The intake system underwent extensive testing based on the most challenging real-world driving conditions to ensure capable performance no matter the weather.

GENEVA – With Corvette Racing in its DNA, the all-new 2017 Corvette Grand Sport is a pure expression of the car’s motorsports-bred pedigree. It was introduced today at the Geneva International Motor Show.

The 2017 Corvette Grand Sport offers an estimated 1.05g in cornering capability – and up to 1.2g with the available Z07 package.

“Racing has been part of Corvette’s essence for more than 50 years and that track experience has helped us build better, more capable cars,” said Mark Reuss, executive vice president of Global Product Development and Global Purchasing and Supply Chain. “The global acclaim for the seventh-generation Corvette validates that direct link and the 2017 Grand Sport takes its track-bred technology to a new, exciting threshold.”

The Corvette Grand Sport coupe and convertible go on sale this summer in the U.S. and in the fall in Europe.

Engineers adapted the chassis tuning, upgraded cooling systems, and performance technologies of the Corvette Z06 to give the new Grand Sport capability commensurate with its racing-derived history.

The result is a potent track car. In fact, the Grand Sport with the Z07 package is less than one second off the track record for the previous-generation Corvette ZR1 on the road course at GM’s Milford Proving Ground.

“The choices are almost endless,” said Harlan Charles, Corvette product marketing manager. “The packages take personalization to an unprecedented level, enabling customers to create their own Corvette Grand Sport statement like no other.”

The Tension Blue color is a bold, modern take on the hue historically associated with the Grand Sport. Inside, a three-dimensional representation of an original Grand Sport race car is embossed in the headrests and that shape is also used on an instrument panel plaque that carries a unique build sequence number.

The Collector Edition will be offered later in the model year in the U.S. and Europe.

Our extensive lineup includes the 4500HD, 4500XD, and 5500HD fitted with diesel engines, in Regular Cab and Crew Cab variations. The 3500HD and 5500XD with diesel engine are available in a Regular Cab configuration. Or go with the 3500 and 4500 trucks powered by the 6.0L V8 gasoline engine. The LCF series will have limited quantity and is available at select dealers only. 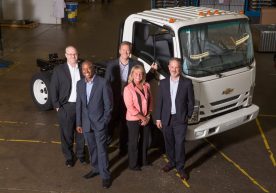 Redesigned for 2017 and priced from $21,895, the Chevrolet Trax packages premium features at an exceptional price. The 2017 Trax boasts a new athletic, contemporary design inside and out with remarkable cargo versatility, while offering a host of new available safety features and a new infotainment system — with available Apple CarPlay and Android Auto compatibility. The Trax reinforces Chevrolet’s commitment to offering the latest technology at an entry level in the fastest-growing segment in the industry.

HERE’S THE STORY
Redesigned for 2017 and priced from $21,895, the Chevrolet Trax packages premium features at an exceptional price. The 2017 Trax boasts a new athletic, contemporary design inside and out with remarkable cargo versatility, while offering a host of new available safety features and a new infotainment system — with available Apple CarPlay and Android Auto compatibility. The Trax reinforces Chevrolet’s commitment to offering the latest technology at an entry level in the fastest-growing segment in the industry.

The Trax lineup in North America is offered in LS, LT and Premier trims.

QUOTABLE
“The 2017 Chevy Trax offers advanced technology, premium features and comprehensive safety in a small SUV package,” said Steve Majoros, director of marketing, Chevrolet Cars and Crossovers. “The Trax is positioned to deliver exactly what our customers want: the latest technologies in the fastest-growing segment in the industry.”

Make sure that you have the correct tire pressure in all five tires. (In case you never noticed, there’s a tire in the trunk.) There’s plenty of debate about what constitutes “correct” tire pressure, but we suggest going by what your vehicle manufacturer recommends, which should be listed on the side of the driver’s door, on the glove compartment door, or in the owner’s manual. Don’t confuse the “maximum tire pressure” listed on the sidewall of the tire with the “recommended tire pressure” provided by the manufacturer of the vehicle. While it’s okay to inflate your tires to the “maximum tire pressure” number, “Recommended tire pressure” is the ideal pressure you want in your tires. If you’re carrying an extra heavy load, follow the recommendation for “heavy loads,” which is usually listed in the manual that came with your mother-in-law. (Or your car’s owner manual.)

Ready for some more high-school physics? Remember that tire pressure will increase as the outside air temperature rises. In fact, tire pressure will go up approximately one pound for every 10 degrees Fahrenheit. So, tires that were at 35 PSI back in January when you drove to the slopes could easily be closing in on 45 pounds on a hot July day at the beach. Under some conditions that increase in pressure is enough to blow the tire! If nothing else, a tire that’s overinflated will wear prematurely and will cause the car to handle and brake poorly. Don’t count on your electronic tire pressure monitoring system to alert you to an overinflated tire, either — the warning light will only get illuminated when a tire’s air pressure is too low, not too high.

By the way, while you’re out there checking the air in those tires, toss that stupid pencil-style pressure gauge in the dumpster where it belongs and get an accurate, dial-type gauge.

Call our Service Department today at 630-898-9630.  Schedule your appointment online!

Are you looking for your own award winning vehicle?  Visit our showroom on the corner of Route 30 and Route 34 in Aurora, IL or online at www.WestphalChevy.com.  Our customer care team is always happy to answer any questions you may have or provide pricing quotes etc.  You may call them at 630-898-9630.

General Motors is reducing the cost of its OnStar 4G LTE data plans by up to  50%, the automaker said today.

Since 2014, most GM models have come with 4G LTE Wi-Fi connection if owners subscribe to OnStar after a three-month trial period, which is free along with 3 gigabytes of data use. After that, OnStar packages range from $200 to $350 a year.

“As more people embrace the technology, it brings down the cost of entry for all users,” said Laura Keck, OnStar’s subscriber marketing manager. “With these lower prices, we expect even more customers to use 4G LTE connectivity.”

GM partners with AT&T to deliver the in-vehicle connectivity.

If you are looking for a vehicle with 4GLTE, please visit our website or drop by our showroom.  Thanks!

For more information on the new plans and pricing, go to www.onstar.com/us/en/4glte-subscriber.html.