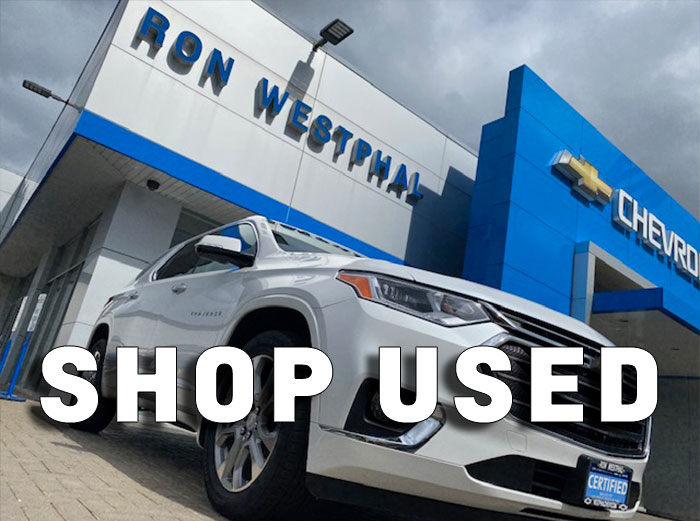 With inventory being tight these days you may want to consider owning a GM Certified pre-owned used vehicle.   You may get a better selection and save some money to boot!

Select used vehicles must pass a strict 172 point vehicle inspection before a dealer is allowed to sell them as a GM Certified vehicle.  You know the oil change is fresh and the vehicle is safe.  Tire tread depths are checked along with all fluids and lights.  Even cosmetic issues are addressed.  In this way, you can make a confident purchase with no worries.  In fact, GM is so confident in the certification process they include a GM extended warranty with every GM Certified pre-owned used vehicle.

Visit Ron Westphal Chevrolet online or drop by our showroom today.  If you have any questions, please don’t hesitate to give us a call at 630-898-9630.

Although only GM vehicles are allowed to be GM Certified, we thoroughly inspect every used vehicle on our lot.  We perform oil changes and complete a full service/safety inspection before sale.

Ron Westphal Chevy is located in Aurora/Oswego, IL near Naperville, Plainfield, Montgomery, and many other Fox Valley communities.  They are a family-owned dealership that has been serving the area for over 30 years. 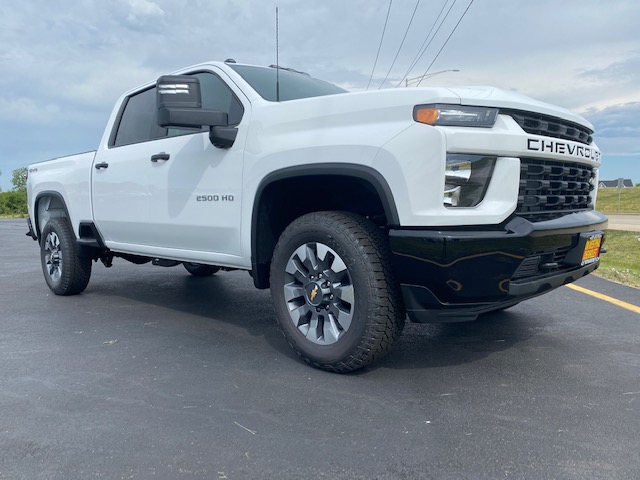 With two heavy-duty powertrain options, innovative towing technologies, and a large and functional Durabed, Silverado HD pulls up ready to work. And whatever the job, there are five unique trim levels ready to match your need.

Silverado HD is made with high-strength steel where you need it without compromising efficiency. From the frame to the cargo bed floor, this heavy-duty truck is engineered with seven different types of steel – each gauge chosen to be stronger, lighter and more durable than the previous generation.

1. Bernard Cigrand, a small-town Wisconsin teacher, originated the idea for an annual flag day, to be celebrated across the country every June 14, in 1885. That year, he led his school in the first formal observance of the holiday. Cigrand, who later changed careers and practiced dentistry in Illinois, continued to promote his concept and advocate respect for the flag throughout his life.

Ron Westphal Chevrolet is proud to fly the American flag EVERY DAY!

2. It is widely believed that Betsy Ross, who assisted the Revolutionary War effort by repairing uniforms and sewing tents, made and helped design the first American flag. However, there is no historical evidence that she contributed to Old Glory’s creation. It was not until her grandson William Canby held an 1870 press conference to recount the story that the American public learned of her possible role.

3. The lyrics of “The Star-Spangled Banner,” America’s national anthem since 1931, are taken from a patriotic poem written by Francis Scott Key after he witnessed the Battle of Fort McHenry during the War of 1812. His words were set to the tune of “To Anacreon in Heaven,” a popular British drinking song.

4. In the 1950s, when it seemed certain that Alaska would be admitted to the Union, designers began retooling the American flag to add a 49th star to the existing 48. Meanwhile, a 17-year-old Ohio student named Bob Heft borrowed his mother’s sewing machine, disassembled his family’s 48-star flag and stitched on 50 stars in a proportional pattern. He handed in his creation to his history teacher for a class project, explaining that he expected Hawaii would soon achieve statehood as well.

Heft also sent the flag to his congressman, Walter Moeller, who presented it to President Eisenhower after both new states joined the Union. Eisenhower selected Heft’s design, and on July 4, 1960, the president and the high school student stood together as the 50-star flag was raised for the first time. Heft’s teacher promptly changed his grade from a B- to an A.

5. Unlike setting an intact flag on fire, flying one upside-down is not always intended as an act of protest. According to the Flag Code, it can also be an official distress signal.

6. The Flag Code stipulates that the Stars and Stripes should not be used as apparel, bedding or drapery.

7. The practice of draping coffins in the American flag is not reserved for military veterans and government officials. On the contrary, any burial may incorporate this tradition.

8. Etiquette calls for American flags to be illuminated by sunlight or another light source while on display.9. During the Vietnam War era, some demonstrators burned American flags as an act of protest. The Flag Protection Act of 1968 was enacted in response, making it illegal to burn or otherwise deface the Stars and Stripes. In two landmark decisions 20 years later, the Supreme Court ruled that the government couldn’t curb individuals’ First Amendment rights by prohibiting desecration of the U.S. flag. Respectful burning of damaged flags according to established protocol has always been acceptable.

10. When flags are taken down from their poles, care must be taken to keep them from touching the ground. In fact, the American flag should always be kept aloft, meaning that rugs and carpets featuring the Stars and Stripes are barred by the Flag Code.

11. When the flags of cities, states, localities or groups are flown on the same staff as the American flag, Old Glory should always be at the peak. When flags of two or more nations are displayed, they should be of equivalent size and flown from separate staffs of the same height.

12. The Flag Code strictly prohibits adding an insignia, drawing or other markings to the Stars and Stripes. Some American politicians have been known to defy this regulation by signing copies of the U.S. flag for their supporters.

13. Ever wondered how to correctly fold an American flag? First, enlist a partner and stand facing each other, each holding both corners of one of the rectangle’s shorter sides. Working together, lift the half of the flag that usually hangs on the bottom over the half that contains the blue field of stars. Next, fold the flag lengthwise a second time so that the stars are visible on the outside. Make a triangular fold at the striped end, bringing one corner up to meet the top edge. Continue to fold the flag in this manner until only a triangle of star-studded blue can be seen. 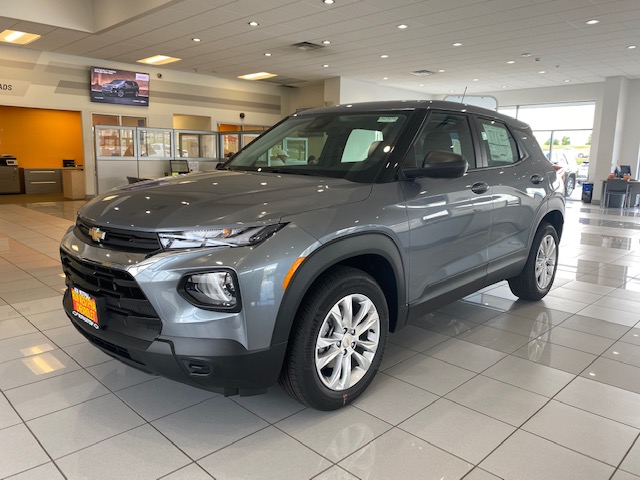 What to do if you can’t find a new vehicle?  Here are some tips from Ron Westphal Chevrolet that can help put you behind the wheel of the vehicle you want.

Don’t panic.  There are still options out there that will provide you with dependable transportation.

Unfortunately, the microchip shortage is real.  And, even though vehicle availability will get better in time for the next few months you may have difficulty finding a vehicle to suit your needs.  Below are some tips that may help you find your perfect next ride.

If a new car dealership is sold out of the new models you are looking for, ask to see their demos and service loaners.  Although these vehicles will have some mileage on them, it is usually under 7,500 miles.  And, these vehicles have not been titled so you could get the brand new vehicle incentives that are in effect at the time of delivery.  Demos and loaners are usually current model year vehicles and you may get extra discounts on these units.

Ask your salesperson about inbound vehicles.  They may be able to tell you exactly when a vehicle is coming in and you could purchase it before it even hits the lot.  Not all dealers will sell or hold inbound vehicles but it doesn’t hurt to ask.  GM has changed there rules during the pandemic to allow dealers to lock in incentives on most GM inbound orders.  Most dealer’s websites show some inbound vehicles but NOT all of them!  See your dealer for details or call Ron Westphal Chevrolet at 1-630-898-9630 to receive an updated and complete listing of inbound vehicles.

Ask your dealership to buy a pre-owned vehicle for you.  At Ron Westphal Chevrolet we have online access to vehicle auctions all across the country.  We can purchase a vehicle on your behalf and have it shipped to our dealership.  We purchase all makes and models of cars, trucks, vans, crossovers, and SUVs.  Call our Customer Care Center at 630-898-9630 for details.

Why not consider pre-owned?  GM Certified vehicles are typically late-model vehicles that can be very nearly new.  All Certified vehicles pass a strict 172 point vehicle inspection performed at the dealership and come with a GM extended warranty at no additional cost to you.  You would be getting a dependable vehicle even if it technically wasn’t brand new.  Why not drive it for a while until new vehicle inventory availability increases.  Then, trade your Certified vehicle in towards the brand new vehicle.   Who knows…you may just fall in love with it and keep it for years to come.

Repair your current vehicle.  If your current GM vehicle is getting to the point where you usually trade it in, you may want to consider keeping it an extra year.  Take it to the dealership or a mechanic you trust and have them give it a thorough going over.  It may be worth it to spend money on maintenance repairs depending on what your vehicle needs.

Thanks for reading about what to do if you can’t find a new vehicle.

Looking for the latest in GM Fleet information?

Find out everything about 2022 GM Fleet innovations and solutions HERE!

General Motors Fleet is excited to provide your business with the latest news on our vehicles, features and services. We want to help your business stay up to date so it can stay ahead of the curve. We’re also pleased to continue our commitment to electrification with the announcement of the first all-electric Chevy Silverado† and the upcoming BrightDrop™ delivery solutions. And while there’s lots that’s new for 2022, the exceptional one-on-one help you will receive from our fleet team is something that will never change.

SETTING THE STANDARD FOR FLEETS

General Motors Fleet is proud to offer 60 vehicles from four distinct brands to serve businesses. We’re pleased to provide options that have plenty of space such as our complete lineup of vans and full-size SUVs. We also have a full lineup of cars, including the reliable Chevrolet Malibu, for businesses looking to add comfort and efficiency to their fleet.

Ron Westphal Chevrolet is located where Aurora meets Oswego, IL.  Our dealership is on the corner of Route 30 and Route 34 across from LA Fitness, Sam’s Club and JC Penneys.

Thanks for reading about 2022 GM FLEET .  For more information view source:  https://www.gmfleet.com the /2022-vehicles-features-services