New Silverado trucks are in stock

If you thought our in stock inventory looks less that usual, you’d be correct!

GM (and nearly all other vehicle maker) are suffering though a microchip shortage.  Silverado trucks are still being built but without the microchips–they are being set aside until the parts arrive.  The good news is we have a lot of Silverados waiting in the wings…nearly ready to be shipped.

More good news is the fact that GM is funneling most of their chips toward Silverado trucks, seeing as they are a good seller.  At Ron Westphal Chevrolet, the Silverado is our #1 selling vehicle.

So, even though we have more Silverado trucks in stock it is not as many as we would like.  We do offer our clients a choice of choosing from inbound models too.  Some folks don’t mind waiting a week or so to get exactly what they want.

These new 2021 Silverado trucks in stock are selling quickly.  If you are in the market for a new Chevy Silverado, please call our Customer Care Team at 630-898-9630 to check availability.  Or, take a peek on our website at https://www.Westphalchevy.com.

Our used vehicles are selling fast too…and we could sure use more trade-ins.  We are willing to buy your vehicle even if you don’t buy ours!

Thanks for reading about New Silverado truck are in stock now at Ron Westphal Chevy.

General Motors will close the Grand River Assembly plant in Michigan where the Chevy Camaro is built until late June, a source revealed to local news outlet WLNS 6 last week.

If you have any questions about the GM funneling chips, the chip shortage or inventory availability–please contact our Customer Care Team at 630-898-9630.  Or visit us online at https://www.WestphalChevy.com.

The assembly plant closed on May 10th due to a semiconductor chip shortage and will remain closed until at least June 28th. The Grand River Assembly plant builds the Chevy Camaro, as well as the Cadillac CT4 and CT5 sedans.

GM shut down the Lansing Grand River plant at the beginning of March due to the chip shortage, with the facility remaining offline for the rest of March and all of April. Production returned for a brief period between May 3rd and May 10th, but the facility has now gone back offline amid another shortage of chips.

In addition to the Lansing facility, GM has also temporarily idled its Fairfax Assembly plant in Kansas and CAMI Assembly plant in Ontario until late July. The Fairfax facility produces the Chevy Malibu and Cadillac XT4 crossover, while the CAMI plant builds the Chevy Equinox. As of May 3rd, GM had missed out on the production of roughly 79,600 vehicles in North America over the chip shortage, including 17,000 examples of the Chevy Equinox and a combined 24,100 examples of the Chevy Malibu and Cadillac XT4.

GM is funneling the majority of the chips it has access to toward its various pickup truck and SUV plants, as these vehicles are the bread-and-butter of its business. The Chevy Silverado and GMC Sierra are built at the GM Fort Wayne Assembly plant in Indiana and GM Silao Assembly plant in Mexico, while the heavy-duty Silverado HD and Sierra HD are produced at Flint Assembly in Michigan. The automaker’s line of full-size SUVs, such as the Chevy Tahoe and GMC Yukon, are built at Arlington Assembly in Texas.

Many experts predict the semiconductor shortage will persist to some degree throughout the year and could extend into early 2022. A variety of factors have led to the shortage, including increased demand and production setbacks related to factory fires and the COVID-19 pandemic.

Thanks for reading about GM funneling chips.

Unknown location
Dispatch says driver may have stumbled away while milk drunk.
Police are currently looking for suspect
P.S. have a laugh today everybody 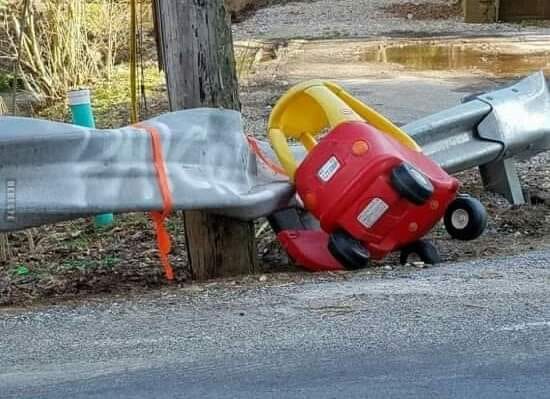 You gotta check out this Multi-Flex Tailgate on 2021 Chevy Silverado!

6 different configurations to make your life a little easier.  And, it’s in stock now at Ron Westphal Chevrolet.   Thanks to Danny Cardinal and Rick Jacobsen for this video.   https://www.WestphalChevy.com

The new Multi–Flex tailgate will be available as an option on all 2021 Silverado 1500 models and offer customers six different functions, similar to the GMC Sierra. Owners will be able to use the tailgate as a workbench, a makeshift bed step with a 375-pound capacity, and a bit of everything in between.

Other exterior changes include the deletion of the manual tailgate with EZ Lift. Meanwhile, the manual tailgate with EZ Lift and with power lock and release becomes standard on Custom (1CX), Custom Trail Boss (2CX) and LT (1LT). Additionally, the power up and down tailgate is now standard on LTZ (1LZ) and available on LT (1LT), RST (1SP) and LT Trail Boss (2LT) models. Finally, the Multi-Flex tailgate is introduced as an option on all trims. See the table below for complete tailgate availability.

If you have any questions or would like to schedule a demo, give us a call at 630-898-9630.  Our sales department is open until 8 pm weekdays and 5 pm on Saturdays!

Thanks for reading about the Multi-Flex Tailgate on 2021 Chevy Silverado.

New Corvettes are in high demand!   Every Corvette we get has already been purchased and ordered for that specific client.  Each dealer is only allotted a few Corvettes each year and it’s never enough:(  So, the earlier you talk to your dealer and place an order, the higher your chances are of actually getting your dream car.

Ron Westphal Chevrolet is a family-owned modern dealership in Aurora/Oswego, IL near Naperville, Plainfield and Montgomery.

Thanks for looking at our Carbon flash/edge red stinger Corvette video.

On the heels of the return of the Blazer as a crossover SUV and Hummer as an electric pickup, General Motors has filed for trademark protection of the name Cheyenne, MuscleCarsAndTrucks.com reports.

For the latest information on what’s going on at Chevrolet, call the Ron Westphal Chevy customer care team at 630-898-9630 or visit us online!

The Cheyenne name has previously been used as a trim level on Chevy’s full-size pickups in the U.S. and currently designates the top versions of the Silverado that are sold in Mexico.
It was also featured on a two-door muscle truck concept that debuted in 2013.

GM designated its use for “motor land vehicles, namely, trucks,” which could cover a standalone model or trim level for an existing truck, and there are several possibilities on the horizon.

The first and most compelling would be its use on Chevrolet’s upcoming electric Silverado, which has been confirmed without many details, aside from offering a driving range of over 400 miles per charge.

ELECTRIC ‘CHEVROLET CAMARO’ WILL HAVE A TWIST

Chevrolet could also do a little downsizing. Ford is expected to resurrect the Maverick name on a compact pickup smaller than the Ranger this summer, while Fiat Chrysler (now Stellantis) last year filed a trademark for Dakota, which was the name of Ram’s most recent midsized pickup. Chevrolet hasn’t mentioned any plans to launch a pickup smaller than the Colorado, but with the arrival of the Maverick and Hyundai Santa Cruz, a compact truck war could be imminent.

It could also end up being used as it previously was, as a Silverado trim level. There are currently eight available, so Chevy doesn’t seem to shy away from offering its customers as much variety as they can handle.