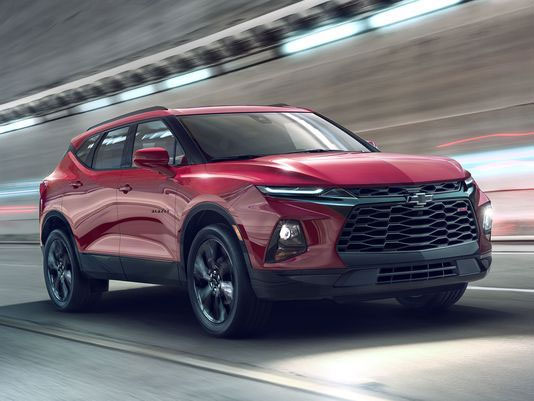 As you can probably tell from the looks of this awesome suv, this ride doesn’t have much in common with the boxy, all-wheel-drive, body-on-frame Blazer of yore. The 2019 version rides on a unibody frame it’ll share with the GMC Acadia. Its shape looks, well, not like a serious off-road machine, but rather like just about every other crossover on the roads today, albeit with a slightly meaner, Camaro-inspired front.

Blame aerodynamics, but also consumer demand. We’re living in the crossover age, to the point that Ford is killing off most of its car lineup to sell more profitable trucks and SUVs. As Car and Driver points out, GM already had five crossover in the Chevy lineup—Trax, Equinox, Traverse, Tahoe, and Suburban—before it decided to reboot the Blazer, which now sits somewhere between the second and third entries on that list in size. With all those family haulers already in the group, you have to wonder why Chevy didn’t seize the opportunity to make a serious off-roader again.

The new Blazer will come with a standard 3.6-liter V6 and optional AWD. The 18-inch wheels come standard, but 20- and 21-inchers will be available. Expect to see it in early 2019.

For additional information please contact our Customer Care Team at 630-898-9630.  Thanks for reading about the all new Chevy Blazer!

Rumors of the Blazer’s return after a 13-year spell on the sidelines have all been confirmed by a heavily camouflaged SUV doing test runs in the last few months. Unless Chevy’s got a surprise up its sleeve, this prototype is the new Blazer.

There are still plenty of question marks surrounding the returning nameplate. We’re no closer to answering a lot of them, but this new set of spy shots is giving us a lot to take note of. Arguably the most revealing sections of the dressed up Blazer are the headlight fixtures. Unlike past spy photos that covered almost the entire body of the SUV, the latest ones show the headlights in all their glory. By the looks of it, we can now clearly see a sliver of LED lights arranged neatly horizontally. I don’t think that these lights will serve as the main headlamps of the Blazer. History — and recent trends — suggests that these could be the daytime running lights of the new SUV. Just below them, we can see a pair of circular fog lamps and, while a little obscured by the wraps, the SUV’s turn signal indicators could be sitting just below the lamps.

The other noticeable element is the set of wheels. I can’t say with any certainty what size those wheels are, but they look big enough — maybe 20s? — for me to think that the model that’s being tested is a high-end trim level of the Blazer. It might even the range-topping version considering that it also looks to have a roof-mounted spoiler at the back. Previous spy shots of the Blazer also hinted at a front grille that’s sporting a number of horizontal bars. It’s not that different from the grille on the smaller Traverse, though I do wonder if Chevy’s going to use a similar two-tier grille design with the Chevrolet logo connecting the two. The bigger Equinox has it, too, so it’s likely that we’re going to see the same treatment on the Blazer.

The side profile of the test vehicle also gives us an idea of how long the Blazer is.

The side profile of the test vehicle also gives us an idea of how long the Blazer is. It’s long. The hood extends longer than we expected and the body stretches quite a bit, too. Given that, the Blazer should be big enough to accommodate seven people in the cabin comfortably.

Speaking of the cabin, the new spy shots don’t have any new photos of the interior. For that, we’ll have to look back at the previous batch, which had one shot of the cabin that, not surprisingly, was also heavily covered. About the only thing we could make out of that photo was the steering wheel, which had the usual array of control buttons that most steering wheels have these days. A nice nod also goes to what appears to be chrome trim on the steering wheel. I’m guessing that’s going to be a common theme on the exterior and interior of the Blazer. The instrument cluster can also be seen, provided you squint your eyes a little. It doesn’t look like it’s going to venture into the world of those new-age, all digital clusters because I can see traditional circular displays wrapped in, you guessed it, chrome. The center console is heavily covered, too. There’s nothing much to see there other than what looks to be a pair of knobs at the bottom.

Power numbers are a mystery, though considering the fact that the Blazer could be slotted between the Traverse and the Equinox, we’re looking at an output of around 280 horsepower

Engine options for the new Blazer should include a handful of options. The entry-level model, for example, could receive a 2.5-liter four-cylinder while upper-tier trim levels could be in line to get Chevy’s more powerful 3.6-liter V-6 mill. Power numbers are a mystery, though considering the fact that the Blazer could be slotted between the Traverse and the Equinox, we’re looking at an output of around 280 horsepower and 310 pound-feet of torque for the entry-level version and around 330 horsepower and 320 pound-feet of torque for the bigger V-6-powered model.

At this point, there’s too little data to actually make a good estimate on pricing, but there are two directions Chevy could go with this. First, the Blazer could be positioned between the Equinox and the Traverse. This is a move that would have Chevy Relying on the Blazer name for sales as it’s rather hard to fit another model between the $23,580 Equinox and the $29,930 Traverse. Even if it fits in size, that’s still just $6000 to play around with, which would – logically – have the Blazer starting out at around $26,800. The more likely option is that it will be slotted, at least pricing-wise, between the Traverse and the Tahoe, which gives some more wiggle room with the Tahoe price at more just over $17,000 higher than the model directly below it. Placing it between these two models would have the Blazer carrying a price tag somewhere in the area of $38,000 or so which makes sense as the Blazer name itself will likely draw some sales nostalgia. For now, it’s all speculation, but you can expect the latter scenario to be the most likely at this point.

Assuming the new Blazer will actually slot between the Traverse and the Tahoe, it will likely compete head-on with the Ford Explorer. When you consider the fact that the Blazer will be a more upscale version of the Traverse – offering a more luxurious package due to higher pricing – the Explorer makes sense. Add in the fact that it is also available with a 3.5-liter V-6 and permanent AWD system and it’s right up the Blazer’s alley. Add on the fact that the Explorer starts out around $32,000 and easily jumps beyond the $41,000 mark in Limited trim, and it’s a sure model to cross-shop. Of course, one could argue that the Blazer might start cannibalizing Traverse sales since the Traverse technically competes with the Explorer too, but we’ll have to see what happens. On the note, the current Explorer has been on the market since 2011, so it’s about time for a generational shift. If that doesn’t happen before the Blazer hits the market, the Blazer will likely be the most bet and offer better technology.

If Chevrolet’s development and testing schedule for the Blazer goes on without any hitches, it’s safe to assume that we could see the SUV in full production form sometime this year. The most likely scenario would be the 2018 Los Angeles Auto Show in November, though Chevrolet could hold off for a few months and opt to launch the model at the Detroit Auto Show in January 2019 instead. Lord knows that event needs a few headline acts these days.