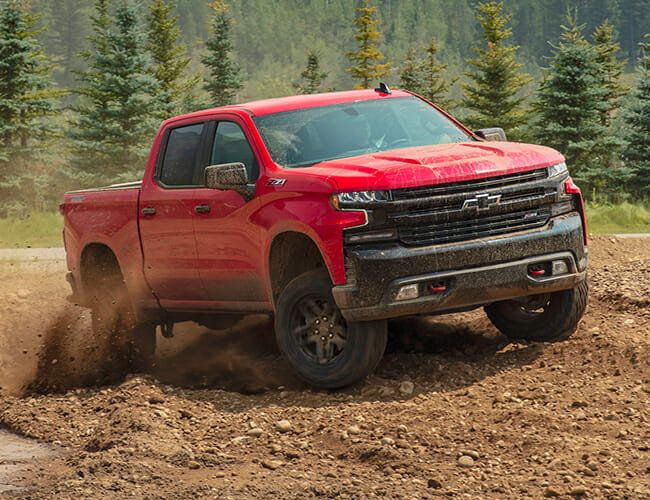 Ford’s toughest truck, the F-150 Raptor, has controlled its own niche in the pickup truck market since it debuted in 2010. Chevy may change that.

For the last decade, Ford’s F-150 Raptor has largely owned the badass full-size off-road pickup truck market. Ram has its Rebel and Power Wagon, but neither delivers quite the same level of high-speed terrain-crushing capability; like the Toyota Tundra TRD Pro, those rigs are made more for traditional off-roading than the free-wheeling fun that is the Raptor’s milieu. Chevrolet has the Colorado ZR2 and ZR2 Bison, but while they offer Raptor-like off-road upgrades, the Colorado is a full size smaller than a regular F-150, let alone the wider, beefier Raptor.

Looking for a new Chevy truck?  Call the Ron Westphal Chevrolet customer care team at 630-898-9630 or visit our website.

The Raptor’s reign as the fiercest predator in the pickup ecosystem may be about to end, however. A new report claims Chevrolet is currently hard at work developing a version of the Silverado designed to take the fight to FoMoCo’s toughest truck.

According to Muscle Cars and Trucks, the new all-terrain truck will be called the Chevrolet Silverado ZRX. If the name reminds you of the ZR2, well, that’s likely intentional; MC&T‘s report suggests that the new truck will largely use the same sort of recipe GM applied to its midsize off-road truck. The Silverado ZRX will reportedly pick up a rock-hopping suspension featuring the same sort of delightful Multimatic DSSV dampers that deliver a remarkable blend of comfort and capability in the ZR2, as well as locking differentials for both front and rear axles, and a host of other upgrades and changes to improve its capabilities beyond the pavement, including tweaks that improve approach and departure angles.

really need them to battle the Raptor; the Silverado’s current top-tier engine, a 6.2-liter V8, is a variant of the engine found in the Camaro and Corvette, cranking out 420 horsepower and 460 pound-feet. (It’s also tied to the same 10-speed automatic used in the F-150 Raptor, as that transmission was a joint Ford/GM project.)

That motor would put the ZRX in a similar league as the Raptor — though the Ford’s 3.5-liter twin-turbo V6 still would have the edge with its 450 horses and 510 pound-feet of torque. Then again, given that the ZRX is reportedly slated to arrive for the 2022 model year, GM has plenty of time to squeeze a little more power out of its fabled small-block.

If all this is true — and it sounds like a solid money-making gambit to us — Chevrolet won’t be alone in pursuing Ford’s ferocious truck. Ram is currently hard at work whipping up a Raptor-fighter called the TRX (get it?) that combines off-road goodies with the supercharged Hellcat motor that makes a bare minimum of 707 horsepower everywhere it goes. Rumor has it Ford may ultimately counter that by packing the Raptor’s engine bay with its new 7.3-liter V8 known internally as “Godzilla,” thus pushing the saurian one-upsmanship about as far as it can go.

Source: Chevrolet May Be Planning to Destroy the Ford Raptor