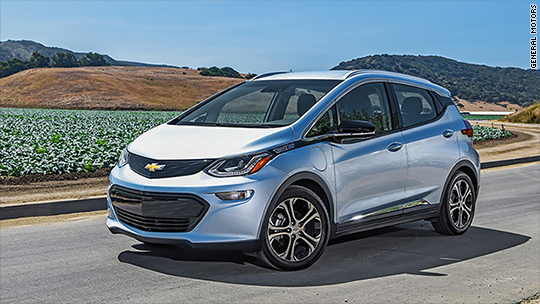 The Chevrolet Bolt EV got a strong head start against the Tesla Model 3 in the marketplace and now it has an early nod from Consumer Reports magazine which named the Bolt its “Top Pick” among small hybrids and electric cars.

The Bolt beat out other cars in its category such as the BMW i3, Ford Focus EV and the Chevrolet Volt plug-in hybrid. It also beat the Toyota Prius which had been named Top Pick in this category in the past.

The magazine hasn’t completed testing on the Tesla Model 3, which has a similar starting price to the Chevy Bolt EV. Base models of both start around $35,000.

Tesla has struggled to begin volume production of the Model 3, though, and, for now, is only building fairly expensive, highly equipped versions of that car. Consumer Reports also hasn’t yet finished testing the the new version of the Nissan Leaf, which is even less expensive than the Bolt but has a shorter driving range.

Consumer Reports named Top Picks in 10 different vehicle categories. To earn a Top Pick, a vehicle must get the best score in its class in Consumer Reports’ tests and also have at least average reliability based on the magazine’s surveys.

Chevrolet was the only other brand with more than one car earning Top Pick status from the magazine. Besides the Bolt EV, the Chevolet Impala was named the magazine’s Top Pick among large cars. It provides “a driving experience akin to a luxury car,” the magazine said.