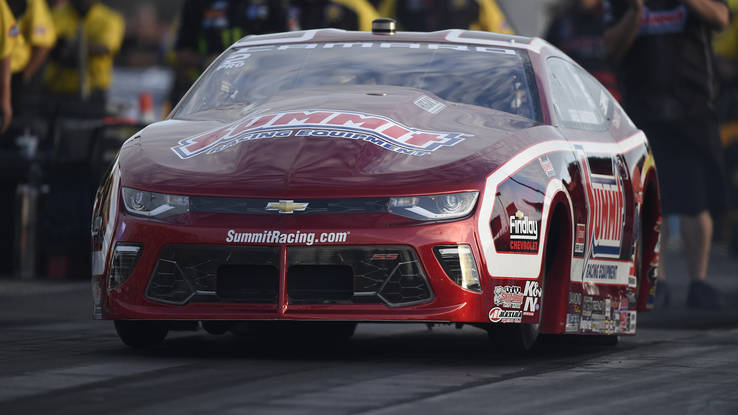 Clay Millican set a new track record, Greg Anderson and Eddie Krawiec took over the poles, and Matt Hagan remained the No. 1 qualifier through Saturday’s action at the Chevrolet Performance U.S. Nationals. 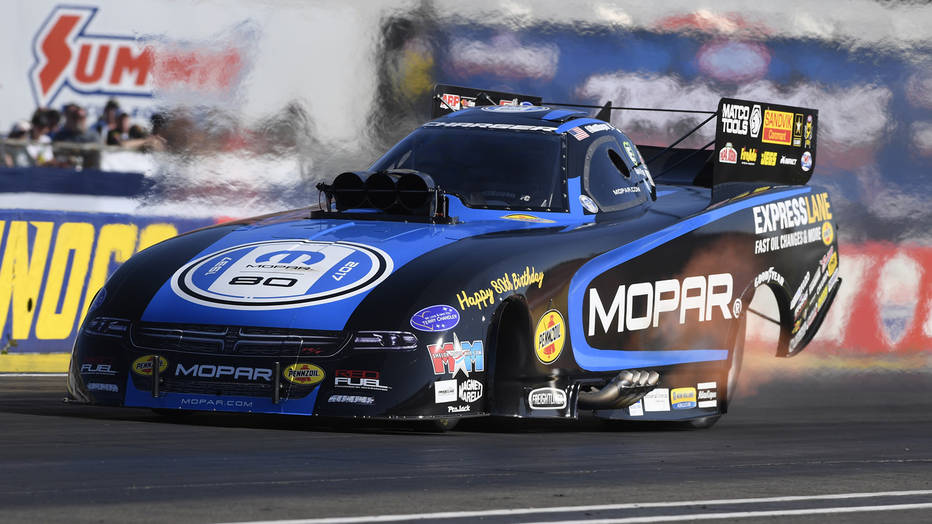 “This is just the icing on the cake; to go to Indy and be able to race in the Traxxas Shootout,” Torrence said. “Thanks to Mike Jenkins and all those guys at Traxxas that put this on. This is an unbelievable deal. When you come out here and you race for 100,000 grand and it’s a race-within-a-race, the competition level is at its highest. It’s the baddest eight guys in drag racing and when you go up there you have to bring your A-game every lap and we were able to come out with a win.”

Millican set the Lucas Oil Raceway at Indianapolis Top Fuel elapsed-time record during the third of five qualifying sessions when he put up a 3.663 run at 329.10 in his Parts Plus / Great Clips dragster.

“I’m glad to be up here tonight. I know we have two more runs tomorrow,” Millican said. “I’m just so proud of (crew chief) David Grubnic and (assistant crew chief) Mac Savage and all the guys that work on that car. They’re the ones who should be up here talking, not me. They deserve all the credit, not me. I didn’t even look at the Christmas tree. My job on a run like that is to do everything a driver is supposed to do to give the race team everything they want from a driver.”

Hagan leads the Funny Car field heading into day three of qualifying with his track record run of 3.799 at 338.77 in the Mopar Express Lanes Dodge Charger R/T during Friday’s opening qualifying run.

Brimming with confidence Saturday after shedding his runner-up image in the Traxxas Shootout for Top Fuel, Steve Torrence is taking aim at the Don Schumacher Racing trio of Antron …

“I think everyone was surprised we didn’t improve,” Hagan said. “Last night was really killer, tonight was pretty killer. You lay the runs over each other and they’re identical. It’s just wild. You’re up there splitting hairs to make these cars run. It’s a real fine line. A little here and a little there makes such a difference. We got us a hot rod though, man. It’s running good, knock on wood, with three good runs in a row. It builds confidence.”

In Pro Stock Anderson ran a 6.561 pass at 210.11 in his Summit Racing Equipment Chevrolet Camaro in the third qualifying round to take over the No. 1 spot from rookie Tanner Gray.

“I’m a little bit surprised,” Anderson said. “The weather conditions are great out there but not nearly what they were yesterday. Quite honestly, the class as a whole kind of missed yesterday. We knew even though the weather conditions were off today if we made a better quality run we could get close and have a chance. It took a very high-quality run. We made a beautiful run and I didn’t leave much on the table.”

Gray is in the second position with his 6.566 pass at 209.88 in his Gray Motorsports / Valvoline Chevrolet Camaro from Friday evening and Drew Skillman, who has three wins this season, is in third with a 6.570 at 209.33 in his Ray Skillman Chevrolet Camaro.

Krawiec raced to the top of the Pro Stock Motorcycle category with a 6.822 pass at 196.62 on his Screamin’ Eagle / Vance & Hines Harley-Davidson during his third qualifying run to bump teammate Andrew Hines to the second spot.

“Our bikes are performing well,” said Krawiec, who won the event in 2014. “We’ve made a lot of different chassis changes as the season has gone forward. It’s been a little bit of a challenge, a little bit of a struggle, but we’ve finally felt that we’ve turned the corner. That’s a tribute to our crew. It takes a lot of effort out here. It’s not one person, I just happen to be the individual on the motorcycle.”

The third and final day of qualifying at the 63rd Chevrolet Performance U.S. Nationals begins Sunday at 11:30 a.m. Catch the action live at noon and 5 p.m. on FOX Sports 1 (FS1).

Thanks for reading about Chevrolet Top Fuel Racing.

As a preview to our upcoming off-road head-to-head comparison test, we wanted to show you what the all-new 2017 Chevrolet Colorado ZR2 looks like, in full detail, in living color.

Thanks for looking at our 2017 Chevrolet Colorado ZR2: Photo Gallery.