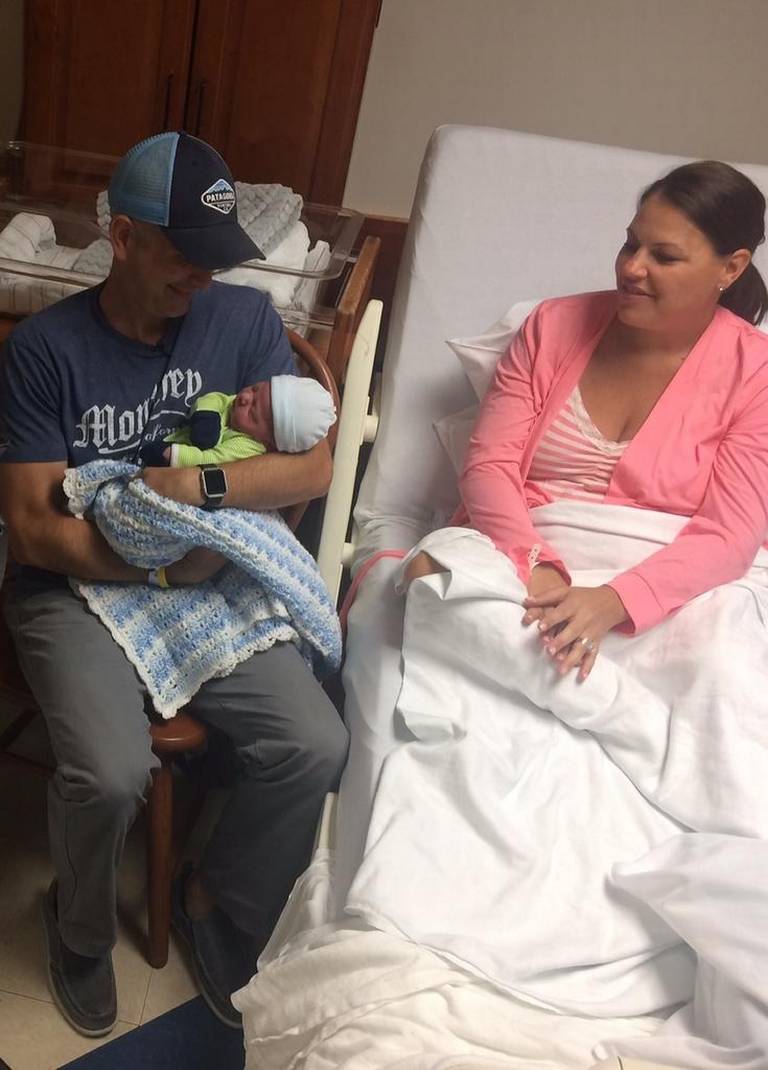 The Ackerman family in Fort Mill, South Carolina, delivered their son Thomas on Monday morning in their Chevrolet truck

It’s actually a pickup, not a delivery truck. But make and model weren’t stopping the Ackermans when their latest came due Monday morning.

Thomas Allen Ackerman, all 8 pounds 15 ounces of him, arrived at 1:30 a.m. as a rarity, a child actually born in Fort Mill. And, as a child born in a four-door Chevrolet.

“I delivered him right in front of the peach trees at Baxter,” said dad Charles “J.R.” Ackerman.

Mom Becky went into labor less than an hour earlier. The couple tried to make it to Piedmont Medical Center in Rock Hill. It wasn’t to be.

“At 12:49 I started really writing it down,” Becky said of her contractions. “It was five minutes apart. It was three minutes apart. They were so close. There was no relief.”

The couple could smile about it all by early Monday afternoon, but in the dark and rain as it happened they weren’t so jovial.

PMC has been trying to build a hospital in Fort Mill for more than 10 years. After competing hospitals followed PMC’s bid with proposals of their own, the issue of who will be allowed to build the town’s first hospital has been tied up in bureaucracy and legal battles ever since.

Becky delivered three girls prior to the couple’s first son. All arrived two or three weeks early. Their youngest girl, Charley, came the fastest. From the time Becky got her hospital bracelet to when Charley got hers, it took about 20 minutes.

“I labored at home for like an hour or two,” Becky said of the earlier pregnancies. “But with this one, I kind of felt like I was a really big baby. I thought we still were in the beginning stages.”

They weren’t. Her water broke as they were passing the QuikTrip gas station. At 1:28 a.m. J.R. pulled over to call 911. Two minutes later he was holding his son.

The baby was born about five minutes before Fort Mill Rescue arrived. Not long for most people, but it seemed like forever as the couple sat trying to process what happened.

The pair did what the 911 operator — Thomas, coincidentally — told them. They used the seat warmers and blankets to keep everyone warm. Even the special gift blanket they’d kept for years, in case they had a son someday, but hadn’t been able to use with daughters Leah, 7, Kendall, 6 and Charley, 2.

“That’s the first blanket I could grab,” Becky said.

In recalling the births of children, mothers pretty much universally get the trump card for their role in the delivery. Yet both Ackermans admit, a dad who can say he delivered the child at an interstate on-ramp has a pretty rock star story to tell. J.R. hopes he didn’t play his card too early by getting out of the first diaper change.

“I just looked at him and said, yeah, you’ve done a lot already,” Becky said.

Becky, a teacher at Fort Mill’s Pleasant Knoll Elementary School, and J.R., in insurance sales, couldn’t get past how the morning unfolded. The name of the 911 operator. The birthday Thomas shares with J.R.’s mother.

And, the story they will share with their son in years to come. How it was an hour after Thomas arrived when they reached PMC. Hours still before the girls would wake up to their grandmother as babysitter, realizing they have a new brother.

One of many surprises for the family on Monday.