Joe Girard, an author and speaker famous for his long-standing Guinness Book of World Records title as the world’s best car salesman, died Feb. 28 at age 90 from injuries incurred from a fall in his home.

Girard sustained head trauma after falling backward on the stairs in his home in Grosse Pointe Shores, Mich., the Detroit Free Press first reported. He died in the hospital two days later. 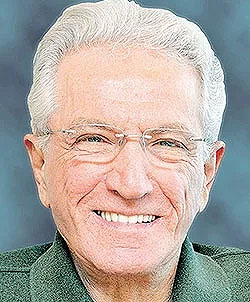 Throughout his career, Girard was an eccentric, speaking often of himself in the third person. He refused to talk to co-workers outside of a “Good morning,” and always ate lunch at his desk so he could dedicate every minute to selling. He paid for customer referrals, wined and dined supervisors at big local companies who knew many people and could send them his way.

Girard made sure his customers were his dealership’s priority, too. He often picked up the tab himself if a customer’s vehicle needed a minor repair, and he hosted an annual barbecue at his home for service department members and their families to ensure his customers were treated well. Girard handed out buttons with his personal logo — an apple with a bite taken out, emblazoned with the words “I like you.”

Girard retired from car sales at age 49 are began writing books, including How to Close Every Sale and How to Sell Yourself.

Girard was fiercely protective of the Guinness title. Last year, a salesman in Dearborn, Mich., claimed to have shattered Girard’s record. Ali Reda, of Les Stanford Chevrolet and Les Stanford Cadillac, said he sold 1,582 vehicles in 2017, a claim supported by General Motors. Reda said he obtained the skills to break the record through reading Girard’s book, How to Sell Anything to Anybody.

Girard sued Reda, “claiming loss of reputation in the community and economic loss, including, but not limited to, loss of book sales, loss of income, loss of opportunities and loss of earning capacity,” according to the lawsuit filed in Wayne County Circuit Court.

Guinness said it would not update the category because of GM’s stake in the game. Without an objective third-party to ascertain the record was broken, Guinness declared Girard the winner by default.