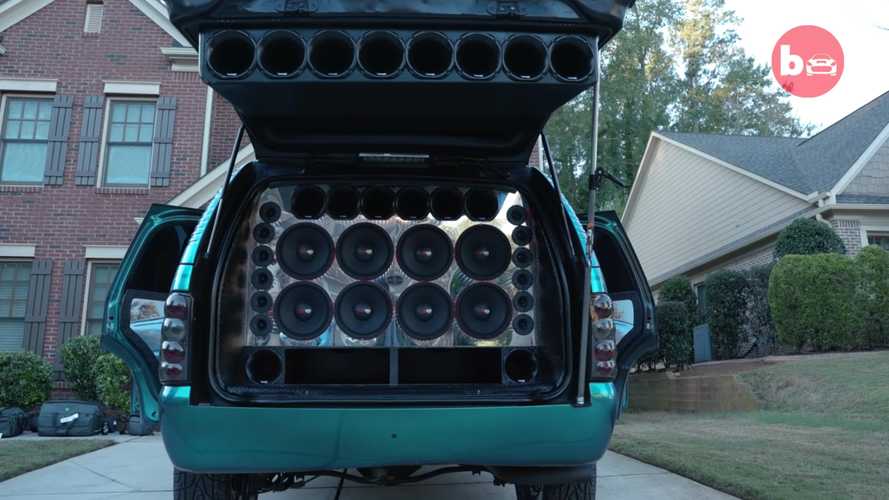 This custom Tahoe has a complete overhaul to carry 62 speakers capable of producing a deafening 160 decibels.

Not only is it loud, this Tahoe has images of the Joker all over the interior and exterior, too.

Jay Jones, who goes by the nickname Joka, has one loudest rides on the road both in terms of its styling and the sound that this machine can make. His 2004 Chevrolet Tahoe features vibrant green paint, Joker-themed accents, and 62 speakers throughout the cabin that can really get a party bumping.

Looking for a Tahoe with less than 64 speakers?  Check out our inventory.  And now through 1.2.19 all 2018 Chevy models are offering Chevy Employee pricing.

Joka didn’t just slap the dozens of speakers in basic enclosures and hit the road. The ones in the back and in the door panels feature LED-laden, infinity-effect surrounds that make them appear to go on forever. Flashing lights only add to the mesmerizing effect.

Joka just needs to twist the head of a Joker figure to boost the bass. He says the whole sound system can produce upwards of 160 decibels, and the video shows that it’s capable of making a woman’s hair go crazy if she sits inside when things are thumping. For reference, this volume is akin to standing next to a jet at takeoff and can be enough to cause someone’s eardrum to burst.

Even without the killer sound system, Joka’s Tahoe would still be a sight to see on the road. It features a ghost-effect image of the Joker on the rear hatch and matching pinstripes adorn the rest of the SUV. The machine rides on a set of 30-inch wheels, and a strip of LEDs around the brake discs adds even more color to the ostentatious rig.

On the inside, a massive, custom screen is on the center stack, and its default display shows a cartoon Joker running. The stereo equalizer incorporates into the LED-lit console and displays Pac-Man chasing ghosts when not in use.

Even if such a wild ride is too showy for your personal style, the clip shows that people get a kick out of seeing Joka’s thumping Tahoe at car shows.

Source: Chevy Tahoe With 62 Speakers Is Your Neighbor’s Worst Nightmare