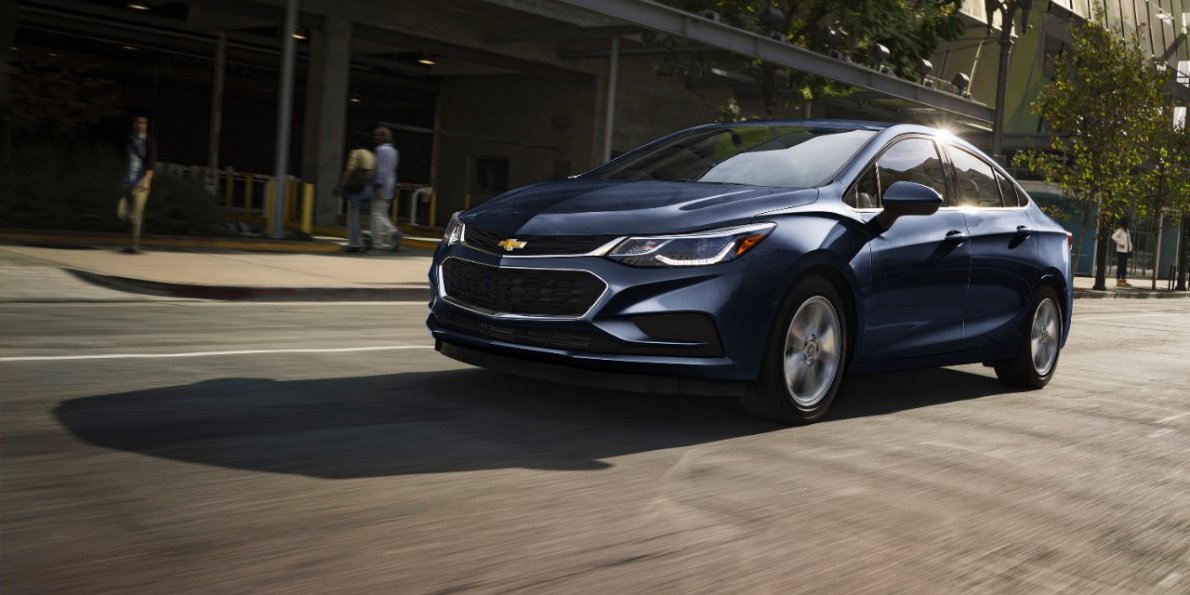 If you like a big-car ride in a small-car package, the Cruze is for you.  You can find an excellent selection of Cruze sedans and hatchbacks at Ron Westphal Chevrolet in Aurora, IL.

It’s hard to overestimate the importance that the Chevy Cruze played for General Motors coming out of bankruptcy and the bailouts during the financial crisis.

Want to test drive a Cruze?  Schedule your VIP test drive by calling our Customer Care Team at 630-898-9630 or visit our website.

Prior to the meltdown, GM had left small cars pretty much for dead. Detroit has historically struggled to make decent profits below the full-size sedan segment, while raking in the dough on pickups and SUVs. It only makes sense to let the Japanese and the Koreans dominate smaller vehicles — that was how these foreign automakers established their beachheads in the US, and small cars were what they did well and profitably.

Spiking gas prices exposed a vulnerability on this front, however. So GM decided that it would take the small car game back — and take the battle directly to popular vehicles, especially the Toyota Corolla and Honda Civic.

Timing for the Cruze couldn’t have been better. It arrived with a decent dollop of American/European style at a time when Toyota and Honda’s offerings were beginning to falter, looking like transportation appliances. The Cruze was a hit, with three million vehicles sold globally, in various guises, since it debuted in 2009.

The second-generation Cruze landed in 2015, and for 2017, Chevy rolled out a turbocharged, 1.6-liter diesel four-cylinder version, equipped with either a nine-speed automatic transmission or a six-speed manual, making 137 horsepower with a satisfying 240 pound-feet of torque (diesels are well-known for their torque).

Okay, GM has been sued for claims that the Cruze diesel is “clean,” but we’re not going to got into litigation with this review, and in any event, the case is still open, and GM explained to Business Insider that it checked all its diesel vehicles for compliance after VW’s crisis. Chevy is still selling the car. And it does offer the only alternative to VW’s embattled TDI diesel cars in the US (the small-displacement motors that were at the crux of the Dieselgate scandal.)

Chevy loaned us a well-equipped $26,190 Cruze diesel — the base price is about $24,000 — with, yes, the six-speed manual. This happy combo would allow us to both sample the car at its best — because diesel and stick are two great tastes that go great together — and evaluate its vaunted fuel economy, claimed to be at 52 on the highway the best of any non-hybrid on the road.

The current lineup of Chevy (and GM) vehicles is very solid. GM has created what is essentially a rolling fleet of connectivity platforms, without sacrificing the identifies of the individual brands. So you feel a sense of familiarity when you switch from a Corvette to a Cadillac to a GMC.

With the Cruze, the impression is sort of small Buick. Unlike small GM vehicles of the past — notably the Cruze predecessor, the awful Cobalt — the impression is not “plastic, plastic everywhere.” Our tester came with a fetching “Cajun Red” paint job and an appealing two-tone “Jet Black-Kalahari” leather interior. The exterior design of this bow-tied four-door isn’t what anyone would call thrilling, but it isn’t a dreary econobox, either. And when it first arrive not quite a decade ago, it certainly showed Honda and Toyota that a little more flash was needed in the compact segment. Oh, and our car came with heated seats — a must-have on any vehicle if you live in a place where the weather turns cold.

Let me cut to the chase with the good stuff. One expects turbo diesels to be peppy, and while the Cruze isn’t a slug, the eight-second 0-60 time, as claimed by Chevy, isn’t head-spinning. It gets the job done. But what the Cruze diesel serves up is freeway excellence. The mpgs are 30 city/52 highway/37 combined. It’s the 52 number that catches your eye. And then out on the highway, with the Cruze tooling along like a much larger car, it’s what wins your heart.

The six-speed tranny, not so much. I struggled to get used to it around town, which is odd because all other GM vehicles with manuals have been sheer bliss (mainly Caddys and Vettes, of course, but still). It has a little trigger on the stick to engage reverse, and over time this got annoying. But that’s a minor complaint. The shifts are balky or grabby. They just aren’t that much fun. The steering is decent, but it’s aiming for smooth rather than crisp.

Otherwise, the Cruze diesel is fully segment-appropriate. Apart from the wonderful highway-cruising comfort, there’s adequate rear-seat space for small adults and statistically mid-range kids (big teenagers might feel cramped). The trunk can swallow enough for a weekend jaunt for a family of five or a week’s worth of groceries.  And don’t forget that there’s also a regular gas version of the Cruze (in both sedan and hatchback form), so you can get the vehicle without dealing with the diesel.

What helps the Cruze to stand apart is GM’s superb suite of infotainment and connectivity features, second only to Audi’s infotainment system. To get this much tech on a mass-market car for a sub-$20,000 price is impressive. There’s a responsive seven-inch touchscreen, Apple CarPlay and Android Auto, USB and AUX ports, Bluetooth connectivity, SiriusXM radio, and OnStar with 4G LTE. That last one is the game-changer. It brings the Cruze’s capabilities up to the luxury level.

So what’s the verdict? Well, if you dig diesel but balk at supporting VW, the Cruze is all you’ve got when it comes to small cars (Chevy also uses a different emissions technology than VW, by the way, which requires a urea-tank replenishment every 1,000 miles, according to the carmaker). That said, if you dig diesel because you dig the driving dynamics, you might want to give VW a second chance. But if you like a big-car ride in a small-car package, the Cruze is for you. And let’s just remember that 52 mpg highway figure, which is pretty sweet — the full-tank range is over 600 miles.

Honestly, I enjoyed the car. Most of all, I think I respect Chevy for embracing choice and passing on yet another engine option to consumers. Diesel isi out there, and it has some advantages. It’s only fair that if you want to buy a small car in the US, you have carmakers trying to provide customers with a diesel point of entry.

Read more about fantastic highway MPG’s Cruze Diesel at the

Thanks for reading about Fantastic highway MPGs Cruze Diesel!